The Film I Always Go Back To: "Big Night" 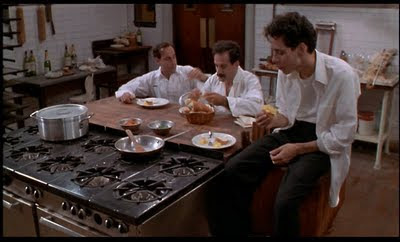 To join in a little blogathon that Kid in the Front Row started over at his blog (check out his entry if you want), I'll make my entry into the subject of the movie I go back to again and again, like the movie version of comfort food. Well, Stanley Tucci and Campbell Scott's Big Night is my mac and cheese (or meatloaf and mashed potatoes or lasagna or whatever your comfort food favorite is). I've written about it twice before (in 2008 when I first saw it, and again when recounting my favorite movies, where it has since risen a few places), and I went back and revisited just a couple of weeks ago when I was feeling a little down.

The movie came about when Stanley Tucci was working on a movie he didn't enjoy and complaining about how there were no good projects for him to work on. So, he decided to create his own project. As co-writer, co-director, and star of the picture, Tucci is even more flawless than ever in his portrayal of Secondo, an Italian immigrant trying to find love, peace, and financial success alongside his brother Primo (Tony Shalhoub). They look for love in their respective women (Minnie Driver and Allison Janney) and look for some way to make it in a land where a restaurant like Pascal's (Ian Holm) can be packed every night when they serve such abominations to Italian food, or as Primo says "RAPE! RAPE! That's what that man serves every night, the rape of cuisine!" Made even harder by the customers they actually do get, making for scenes like this one:

Spaghetti is its own dish, meatballs are their own dish, each plate should have a starch, but not multiple starches. And Seco is repeatedly disheartened by Primo's refusal to compromise anything with his food. Pascal, on the other hand, tells Seco "The customer doesn't wanna look down at his food and think 'what the fuck is this?' he wants to look down and think 'it's steak... I LIKE steak.' Give them what they want, and then you can start giving them what you want." 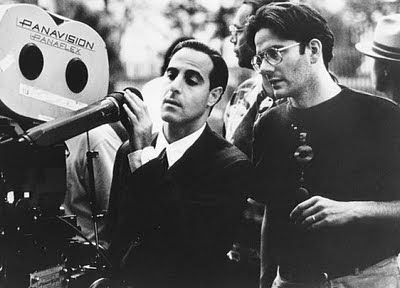 What's amazing about the movie is the care given to each and every character. Pascal, who would seem the villain in a normal movie, is given dimension not only by Holm's terrifically over-the-top portrayal, but by the script as well. He's given motivations for how he treats Seco and Primo, continually asking Seco to come work for him (and there are multiple motivations for that as well) and for how he runs his restaurant and his relationship with Gabriella (Isabella Rossellini). He's not even the second lead in the movie, but he's treated with the care that many movies don't treat their star role with. No one is given short shrift, but I think I keep coming back to the movie for its sibling relationship that hits home to me even though my brother and I don't have the same type of relationship as Primo and Seco, nor are we Italian, nor are we business partners. It's just that indefinable something about the connection they have that is 100% authentic. There are also small moments like this one that the movie lets play out that crack me up every time:

The emotionally affecting, and mostly silent, final scene of Seco making an omelet (high heat, of course, that's how Italians do eggs) the morning after the "big night" of the title, is my very favorite closing scene to a movie for how it answers so many questions without really addressing any of them overtly. I've gone back to this movie over and over again, and I will continue to for a long time. It's a rare creation of deceptive depth and power, and it is most definitely my comfort movie.
Posted by Kyle at 12:55:00 AM

I did not like this film as much as you did. It was good, but not great in my opinion. But, then again I am not a cook therefore this movie doesn't really find a connection with me.

Well, you and Aunt Geba wouldn't stop talking through the whole thing, so I don't know how much attention you were really paying to it. =)


I think campbell scott's best film I've seen so far is Roger Dodger, an overlooked gem. Several other bloggers I recommended it to have enjoyed that 2002 film.